Warbler and JRuby on Netbeans

Have been brushing up my Rails skills last night. I installed the latest Netbeans version (NetBeans IDE 6.8 Release Candidate 2)

Everything looked great but during project setup, I selected the option to use Warbler ('Add Rake Targets to Support App Server Deployment (.war)'). As it turns out, setting up Warbler during project setup just 'breaks'. I have been using the "Built-in JRuby 1.4.0". It seems to be a path issue on my Mac running Snow Leopard (there were some indications on the web).

Ultimately, I was able to solve that issue by installing a dedicated JRuby version that had a nice shorter path. 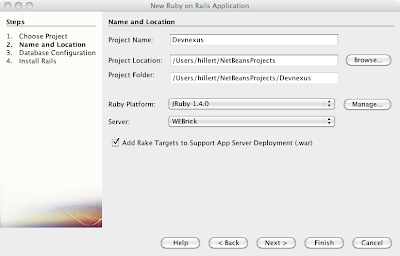 I haven been running into a few other issues to finally get a simple Rails deployment working on my Tomcat instance, but that is a new blog post to come...
Posted by Gunnar Hillert at 08:35