While being in Costa Rica (Caribbean coast) earlier this year I had the weirdest experience with what I thought were ants. One morning I was able to take the following picture in our bathroom. 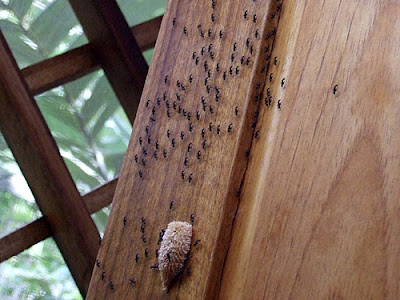 Those little critters looked exactly like ants but at the same time were completely motionless. No activity - They were simply there. When I tried disturbing them, they would simply move out of your way but stop immediately once the disturbance was gone. Besides seeing Howler Monkeys, Leafcutter ants, sloths and toucans, this was a pretty interesting experience.

Much later, when I was reading "A Magic Web" by Christian Ziegler and Egbert Giles Leigh, I finally found out what I had actually seen. On page 134 they have a similar looking picture. It turns out that those ant-like creatures are peanutheads (also called lantern fly) or more scientifically Fulgora lanternaria. You can read more abut them at http://en.wikipedia.org/wiki/Machaca_%28insect%29. More detailed information can be found here.

Unfortunately, I have never seen mature peanutheads (Maybe on my next trip :-) which look so differently compared to the freshly hatched ones. Since I could not find any pictures of Fulgora lanternaria at that early development stage on the internet, I wanted to share the picture with you.