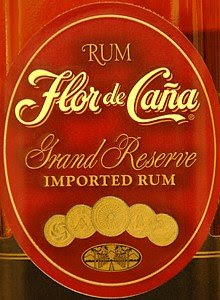 I went to a "package store" the other night here in Atlanta, GA. Well, I bought a bottle of rum from Nicaragua (Flor de Caña) and saw something interesting -

The coat of arms of the former German Democratic Republic (GDR) was on the bottle's label (second seal from the left). Since I grew up in the former east, you really don't encounter its insignias since the fall of the wall that often anymore. The text on the seal is "Für hervorragende Qualität" (For superior quality)

The label also contains a the sign of the Leipzig Trade Fair, which was East-Germany's largest (Second seal from the right).
The text on the label is: "Internationale Leipziger Messe 1980".

The respective rum, by the way, is excellent.
Posted by Gunnar Hillert at 22:21